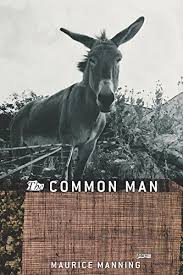 Poet Maurice Manning was born and raised in Kentucky, and often writes about the land and culture of his home. Maurice Manning’s first book of poems, Lawrence Booth’s Book of Visions (2001) was chosen by poet and judge W.S. Merwin for the Yale Series of Younger Poets Award. His subsequent books include A Companion for Owls: Being the Commonplace Book of D. Boone, Lone Hunter, Back Woodsman, &c. (2004), Bucolics (2007), The Common Man (2010), which was a finalist for the Pulitzer Prize in poetry, and The Gone and the Going Away (2013).